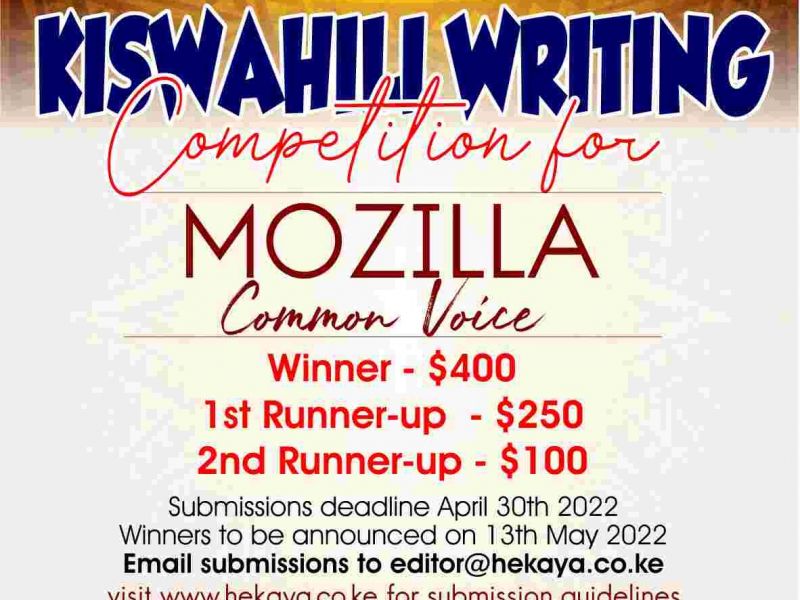 Written by Hekaya Initiative on April 1, 2022. Posted in Submissions.

When we think of our language, Kiswahili, we see it as a vibrant indigenous language tool in the continent with the power to mediate between other African languages without the necessity of a foreign language. With its adoption as an official language in the AU and other countries beyond the East Africa realm planning on adopting it as an official language, its potential has never been greater.

The language is, according to UNESCO, “among the 10 most widely spoken languages in the world, with more than 200 million speakers,” and this is indeed something that should motivate linguistic activists and writers to build more content for this massive audience.

As we anticipate saba-saba (July 7th), this time (historically the date has had a political tone in Kenya) with a celebratory tempo as we mark World Kiswahili Language Day, Hekaya Arts Initiative, powered by and in collaboration with Mozilla Foundation is running a writing competition solely in Kiswahili. The whole idea is to have more engagements and contributions for Mozilla’s Common Voice platform, more specifically for the Kiswahili database.

The submission is not themed to allow for contributors to be as free and creative as possible. It is also open to contributors from any place, not specifically the East African coast. It would be wonderful to read contributions from spaces that do not necessarily speak Kiswahili but have adopted it. How wonderful would it be to think of this beyond standard Kiswahili and receive submissions in the dialects that should receive as much, if not more, attention.

Contibutions can consider the following topics as well:

All submissions should be sent to editor@hekaya.co.ke.