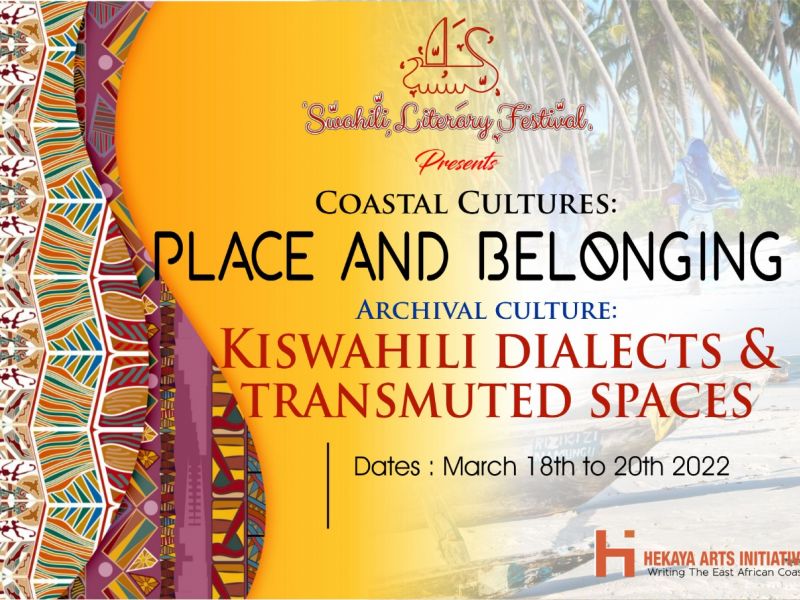 Written by Hekaya Initiative on February 11, 2022. Posted in SLF.

Since the beginning, we have been grappling with questions on identity as regards Uswahili, a theme that has taken different forms over the three years the festival has taken place. Still, it’s a theme that would take more than just three editions to explore fully and the most incredible output from this yearly discourse is that it has raised more questions than answers, which ought to be a good thing. I mean, would there be any impetus to proceed with this line of discourse if we had answers to all the raised questions?

It has been a journey, a four-year journey this March which we hope will take us to more places, accord us more experiences and the delight of treasures hidden in our linguistic and cultural wealth. Every year promises more avenues to explore, more places to go and more people to interact with, and this year we look beyond the cultural boundaries of Uswahili and begin a run-off conversation encompassing the broader coastal culture(s) and how they interact with each other, how each differs yet holds similar values to the other

How each cultural group should (collectively or otherwise) participate in building an archival culture preserving linguistic and cultural knowledge(s). it would be worthwhile to note here that this archival culture could also be an avenue through which coastal cultures can raise more voices towards the repatriation of artifacts uprooted from the rightful owners and spaces during the colonial era.

This edition of the festival and its approach towards extending conversation on indigenous languages is driven by similar efforts by Mozilla Foundation through escalation of Kiswahili as a language for AI on its Common Voice platform. It would also be in order to credit the conversations held late last year in Kilifi county where a bunch of cultural and linguistic activists met over brunch in what can best be perceived as a catalyst to more intellectual discourses on Pwani.

Na kwa mara ya kwanza, we will be holding the festival in two diverse spaces- Mombasa and Kilifi, an angle that also presents us with a unique chance to rethink the festival beyond Mombasa and have it (or parts of it) happen in other spaces within the Swahili coast. With sessions split between the two counties, exploring language(s), the art of literary translation, building archival spaces and constantly celebrating remarkable individuals whose efforts at propagating our language and culture have been monumental, we hope to curate discourses that will extend beyond this edition

Beyond our immediate intellectual and geographical boundaries,

It would be an absolute delight to think of how this ka-small thing called Swahili Lit Fest can take root in other cities, other spaces beyond the Kenyan coast, exploring Vi-Swahili and the people who have held on to their dialects in spite of the  linguistic massacre through standardized Swahili, and enjoy the playful Kipemba and the diversity of language in unique spaces like Comoros and Mayotte…