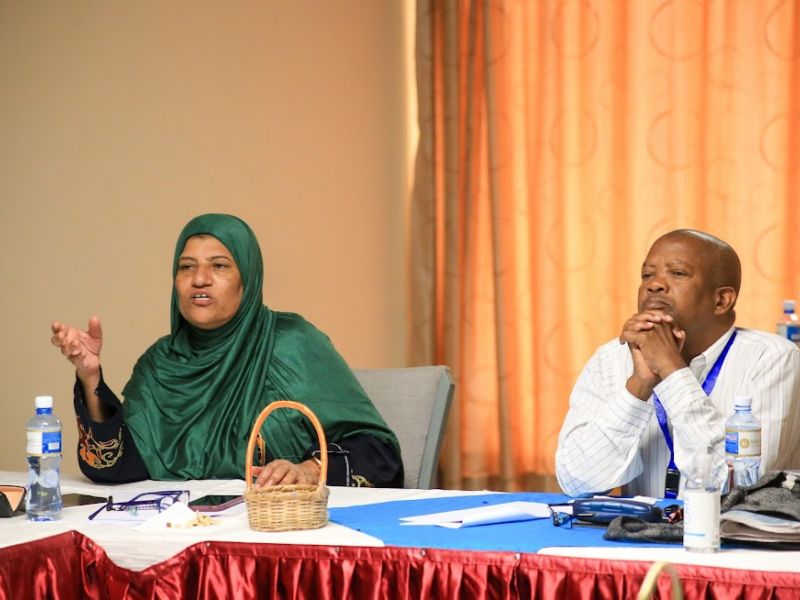 The Spirit of the first Safal-Cornell writing workshop

It’s Thursday morning. The first edition of the Safal-Cornell creative writing workshop is about to begin. Munyao and I had been at the venue late the previous night to make sure all was set. I’ve been at the venue since seven. It would be terrible for a host to come in after the guests. I vilify my body with a mug of instant coffee from the hotel kitchen which my entire system rejects as I try to keep the invading sleep at bay. Sleep was hard to come by the previous night necessitated by emergency trips made between midnight and fajr. Instant coffee is a sham. Perhaps only the exotic Abyssinian jebena buna can give me that subtle heady feeling one gets from the first sip of morning coffee.

Outside, the sky is crying and whenever a wispy ray of sunshine attempts to pry the sky open, rainy clouds zip it back closed, angrily. Later on, I am to feel the weight of the morning down pour as I rush back to town on my three-wheeler book duka to collect some missing name tags for the participants. On any other day Mombasa would have been sweltry with heat that rises once the muadhin’s voice is done calling faithful for fajr, but today, even our weather is welcoming the workshop participants with a cool breath.

I am staring at my reflection in the bathroom mirror busy scanning my beard for the much-anticipated grey as I wait for the workshop participants to arrive. I love grey hair. Grey is astute. Grey is experience. Glamourous. I mean, look at Gurnah, Abdilatif and Soyinka. Sometimes grey is that coming-of-age marker that says Life nearly killed me but I rose, strong as a Titan. Most of all, I think greying hair is a lesson to embrace imperfection, that life is about the black, the white and also the grey patches. There is this, that and another kind of otherness in between that should also be appreciated. Gospel music plays from a tiny speaker stuck on the bathroom ceiling like a pale, lifeless moon. I think of Marc Cohen’s Walking In Memphis and the line there’s gospel in the air. It reminds me of a lifetime ago and my struggle to find Jesus while at the same time grappling with my redacted heritage. How was I to succeed in finding another while I had not yet figured myself out? At break time the speaker spews out Blues, loud and boisterous.

It is an absolute honour for Mombasa to play host for this first edition of the Safal-Cornell Kiswahili Prize writing workshop. It is incredibly personal for me. An answered invocation. Everything in the conference room is perfect as it should be. The candies are sitting pretty in the table top handmade raffia baskets. The water bottles are placed just at the head of the provided notebooks. The AC is exhaling sixteen degrees of cool air and one can catch a whiff of lavender sprayed in the room earlier. It’s a big day for the coastal literary scene. How long has it been since we’ve had a creative writing workshop of this nature, seven years? Are the gods of literature sending us a coded message with this workshop that happens just a day after our very own Idza Luhumyo wins the 2022 Ako Caine Prize?

We must also laud the efforts Lubnah Abdul-Halim has done in ensuring that young writers have a place to hone their skills through her creative writing workshops in Mombasa. Through her efforts we have had quite a number of young writers getting their work out there, Fatma Shaffie for instance, and the poet Farwat who is also attending this workshop.

The previous night as we met the participants and professors, it was clear we would have a terrific time. There is a sense of authenticity here unlike other workshops I have attended for writers of the English language where we speak English, primarily, with accents that are not ours. It is sad how we at times, unknowingly perhaps, embolden foreign languages at the expense of indigenous African languages. Lovely, rhythmic Kiswahili meanders around the dinner tables with variations that make it ever so beautiful. The participants are drawn from Tanzania and Kenya. While one speaks with the kind of superiority that comes from the scholarly grasp of a language, another speaks with the disarming easiness attained through constant use. Both, nonetheless, speak it with so much profound love that one is filled with an acute desire to emulate them. The few English words thrown into the conversation feel like blunt arrows against a metallic shield. Like, I don’t know, something that ought not to be there.

Even as the conversation carries on after dessert, I can’t help but wonder- do writers generally seek validation from creative writing workshops? Does one feel more entitled to being a writer upon attending a workshop? Most here are attending their first workshop, yet each has excelled in their own writing in unimaginable ways. What then is the purpose of a workshop? Among the participants are previous winners of the Safal-Cornell Kiswahili prize. Florence Mwaita, our first winner in the first edition of the Mozilla-Hekaya writing competition was also present. I have read Kiswahili submissions for our competitions before from writers who have never workshopped and the work is so good it hurts. A few years ago, Dr Makumbi (Kintu, Manchester Happened) uttered words during a writing workshop in Kampala, Uganda that have stayed with me ever since. A writing workshop, she argued, does not validate a writer. A writer who has attended a workshop, however, has a better grasp at craft than one who hasn’t.

It is obvious the organizers are not leaving anything to chance with this first edition. The facilitators, Prof Rayya Timmamy and Prof Rocha Chimerah are the best teachers one could have in matters Kiswahili literature and language. Both have had their fair share of published writing and with the experience of teaching craft at university level puts them a notch higher. Significantly, they have both interacted expansively with dialects. And you should have seen how the entire workshop was facilitated in such an easy-going manner that did not involve tedious presentations or complex explanations, with the professors humbling themselves to the level of the participants. It was in this backdrop of humbleness that true learning took place, that multiplicity of thought met experienced “thought shapers” who beat them to a defined, desired form.

And how wonderful was it for the workshop to commence with an interactive session with Mwalimu Abdilatif. In spite of being ill, Mwalimu still showed up. It is this dedication to a cause that makes Mwalimu such a colossal figure in the Swahili-phone literary landscape. He is a living example of his own maxim Mwenye Lake Hawatii.

The impact of this workshop goes beyond the immediate participants to inevitably influence storytelling around the Kiswahili speaking spaces and in other Kiswahili dialects as well. Dialects cannot be evaded when we are talking about writing in an indigenous language like Kiswahili and the dramatic mise-en-scène of the linguistic massacre of standardizing it. The departure from using Kiswahili as informed by its distinct dialects has also provided a leeway for journalists specially to twist words or introduce expressions with English as a point of reference. I have heard of journalists use kujitahidi kwa jino na ukucha (tooth and nail) instead of the more culturally appropriate udi na uvumba. The latter is Swahili-centric, deriving its meaning from the idea of (a Mswahili) burning incense (udi) and making effort to invoke God. It is equally important to write in dialects, and one should— as Mwalimu Abdilatif said— not limit oneself to just a single dialect if they have the capacity to command other dialects. It is important to write in other dialects, at least in a bid to preserve them.

“Language was an important factor for the colonizer and the colonized.” Prof Ngugi Wa Thiong’o (During his speech at the IPA seminar, Nairobi, 2019)

And as the workshop is coming to an end amid farewell tears, I witness something first-hand, and I must say this— poets are a dramatic if not conceited lot. They are. In a good way. Maybe it stems from that ability of collapsing multiple thoughts into stanzas or telling a three-thousand-word story in less than a hundred. Or— and my money is on this— their ability to use hidden language. Lugha fiche. Case in point; we make a quick stop at a famous beach establishment as the sun angles westwards. The wind is so strong it almost blows our heads off. The security guard prohibits us from accessing the beach as it was past six. Well, after a poet, no less, calms him down, he (the said poet) converses with another in a language only poets understand. A prose writer like myself would instead have created a character based on this security guard’s mien, but the poet uses just a stanza to sum up the whole thing.

It is with heavy hearts indeed that we bade each other farewell in the hope that we will keep the conversation going. Many thanks to the sponsors and organisers of this workshop—especially Munyao for ensuring everything ran smoothly, the participants, the professors and most importantly to our elders Mwalimu Abdilatif and Prof Ngugi Wa Thiong’o for championing this wonderful cause of writing and publishing in our indigenous languages. Daima tutasherehekea wazee wetu.