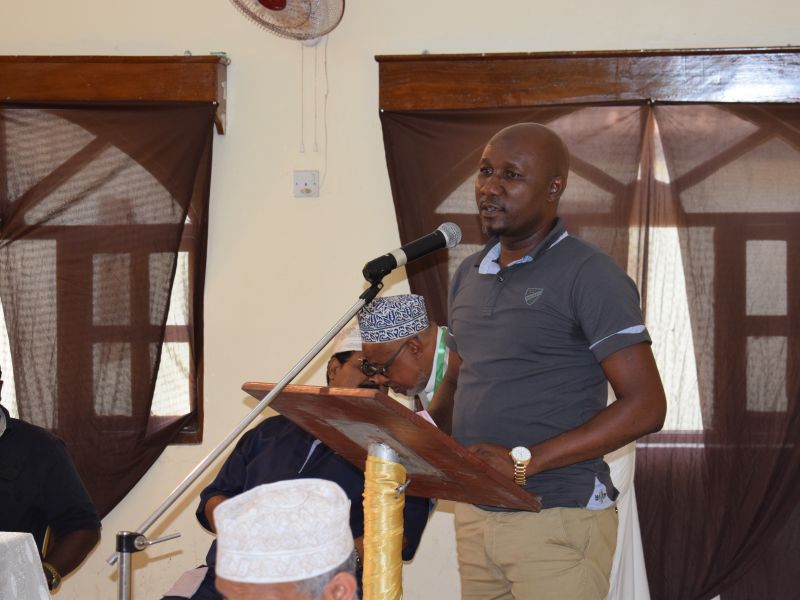 Thanks to the support from Prof Hyder, I can now stand on my two feet

The year was 1995, January, and my peasant parents were wandering all over, trying to get money to take me to Secondary school. Having emerged as the top student from the 1994 KCPE results at Jomo Kenyatta Primary School, Msambweni, Kwale County, I was called to join the best public secondary school in the country then, Mangu High School. It was really the most pleasurable milestone both to me and to the school.

However, with my peasant farmer parents, who hardly even managed to afford school levies and uniform, the opportunity to join Mangu High School was blighted by doom. My parents could not even afford the cheapest village school for me, leave alone a prestigious National School. After trying to mobilize extended family members for support to no avail, and running up and down to the District Commissioner’s office for letters of support, my father was getting out of steam. Slowly, it downed on me that I better get accustomed to the artisanal fishing and helping my parents in the farm, since the days were fast passing with no prospects of support to join any secondary school.

Mid January 1995, my father went back to his normal routine activities, looking for casual jobs in the construction industry in Likoni and Mtongwe areas. Fate had it that he joined a group of people erecting a perimeter wall for Prof Mohamed Hyder. Without knowing the details as to how this conversation started, Professor Mohamed Hyder got wind of my situation through my father. As if that was an electric signal, Prof Hyder sprang to action and contacted some school administrators, then instructed my father to bring me to his house the following day.

The following morning, we went to see prof. Filled with exasperation, anxiety and confusion at the same time, we sat with my father looking at Professor Hyder in the eyes. There was only one question for me, to answer. “Are you willing to join another secondary school, or do you just want to join Mangu high school and nothing else?” Before he could finish, I jumped up and said, “any school will do for me!”

After that short conversation, Professor Mohamed Hyder took me to Sheikh Khalifa Secondary School in Mombasa. He financed for all the preparatory expenses, including school uniform and some amenities, and within a week, I had joined one of the most prestigious private secondary schools in the Country.

The story of my life is long, but suffice to say that it was at Sheikh Khalifa that my leadership skills were honed. Apart from unveiling my love for sports, where I played football and Volleyball for the school teams, I was installed as a school Head boy, while in form three, leading a diversity of student fraternity, white and black, Muslims and Christians, children from abject poverty backgrounds and children wallowing in riches.

Later in my life, I was able to study for both my bachelor’s as well as Masters degrees, but whose foundations would not have been laid were it not for the gracious support from professor Hyder. From a very humble background, I am now able to support not only my family, but also shaped, nurtured and mentored successful lives of countless young people from Kwale County and beyond.

I have had the privilege as a co-founder to two very inspirational Community Based Organizations, KWEA and Samba Sports Youth Agenda which have transformed lives of very many hitherto despaired young people from Kwale County.

Thanks to the support from Prof Hyder, I can now stand on my two feet, advocate for better living standards for my community, as well as shaping the lives of my own children.

May Allah rest his soul in eternal peace.