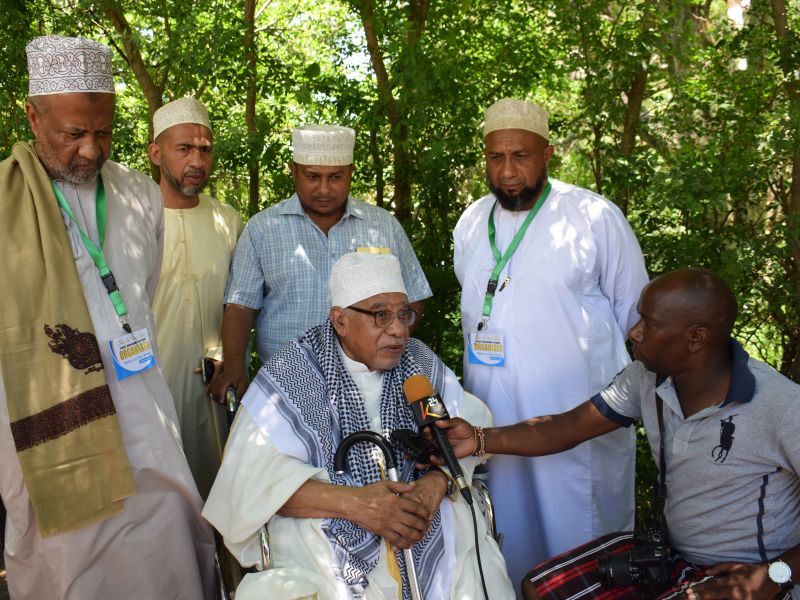 I knew him as a great teacher; a great teacher at Chiromo Campus where he taught us in many areas of Zoology (the study of animals). A great leader, firstly, and again at Chiromo where he became the first Principal of the College of Biological and Physical Sciences. It was in this position, when I had just been employed as a Tutorial Fellow in the University of Nairobi, that he advised me that seas hide many secrets in themselves and also carry a lot of latent wealth for mankind which we will need to use the knowledge and technology that we have learnt and shall continue learning and developing, will this wealth become a reality.

He reminded me that I should know better than anybody else that our understanding of the dynamics of the sea and the participation of the whole people, particularly the younger generation is critical lest that the wealth of the sea remains a mirage, elusive and evasive.  He said, “I now wish to challenge you to not only teach other Kenyans, especially the young generation to join you in the swift and momentous search for new knowledge to enable us conquer the Kenyan sea in order to bring out its beauty in a way that is tangible and touchable to make us joyful about God’s amazing blessings and gifts to mankind.”

Professor was a great philosopher, who taught us on of those complicated subjects which I later came to appreciate in life as a beneficial subject to mankind and especially for aspiring and emerging biologists. History and Philosophy of Biology was a subject we loathed and disliked as irrelevant to a biology student whose interest was in cells seen under a microscope. It was torturous to sit and listen to a retinue of historical dates and write essays on complicated topics that had no relationship to biology and ecology. We even secretly believed that even the lecturers and the Tutors never like it themselves apart from Prof. Hyder and Prof. Victor Jaccarini- a Maltese catholic Jesuit and Professor of Marine Biology who was rumored to also have served as the Head of Catholic Jesuits in Africa and Latin America whilst he taught at the University of Nairobi.

These stout and very religious Muslim and Christian Professors were perceived by us students to have teamed up to hatch a scheme to punish us by studying irritant things in the University. What was worse was that they made this subject compulsory for all biology students so that if you failed in this Unit in your last year your class of degree was lowered down. We were suffering without bitterness! Having said this, I shall never forget the enormous effort that Prof. Hyder and Prof. Jaccarini- the two architects of History and Philosophy of Biology- made to ensure that we developed the liking for this subject.

I remember, one day in particular, when professor Hyder was giving a lecture on the contribution of the Great Ptelomies to the development of advances of science on earth. Ptelomies were renown as great Portuguese who made great contributions to advances in geography and astronomy. They were great geographers and astronomers. During this lecture in BLT2 (Botany Lecture Theatre two), Prof. Hyder uncharacteristically and abruptly stopped talking and instead majestically started taking long paces in front of us with his arms folded behind him. He would also climb up and down the isles between us which continued for more than five minutes. This was not normal behaviors expected of our professors. So we started glancing at each other and exchanging knowing smiles which continued and became whistling and shouting all of which did not bother Professor. Then he suddenly turned around in front of class, looking taller and pointing at us with his right hand shouted. “You! You! You! You! I mean you! One day, you will be Great Ptelomies.” As he said this all of us became very silent and attentive. It really sank on us that one day we would make great achievements in advancing the understanding biology in the world just as the great ptelomies did for geography and astronomy. I have never forgotten this today and his words have remained my guiding radar for my career development and growth.

“Knowledge acquired and applied in abstract without understanding the environment in which this knowledge is to be applied and used to change people’s lives is useless,”

Later on in life Professor confessed to me that History and Philosophy of Biology was crafted and so taught with the view to bring a biologist from the small world of living in a cell as observed under a microscope into the world where normal people live; the world of sunlight, day and night, the world of githeri, ugali and sukumawiki: the world of our jua kali, farming and the world of institutions, government and politics. This, according to Professor, is where the rubber meets the road in real life issues and the development that we all aspire and think about in our vision 2030. “Knowledge acquired and applied in abstract without understanding the environment in which this knowledge is to be applied and used to change people’s lives is useless,” he quipped.  I have never forgotten these words said by Professor as we sat at JKA waiting to board a flight to Mombasa. I wish all of us could interpret and emulate this philosophical thinking and their application in our lives and service to our fellow men and women.

This, according to Professor, is where the rubber meets the road in real life issues and the development that we all aspire and think about in our vision 2030

Some times last year I thought that I had not heard of Professor for a few months although he had informed in a very jovial manner that his health was not so good.  So I call a few of my classmates and other scientist who knew Professor and embraced in them the importance of paying courtesy to teachers and Professors who taught us, many of whom were now retiring or retired. Out of this discussion I purposed to pay Prof. Hyder courtesy on 19 December 2019 and also take to him a Christmas gift.

I also wanted to brief him on the current status of the growth of ocean science and our Kenyan efforts to make Blue Economy beneficial to our people and the economy. Remember that many years before as young Ph.D. graduate in Ocean Science in the specific area of Fish Biology, Professor had given me a great lecture in his office at Chiromo on the need to bring out to the fore the hidden secrets and latent wealth of our seas in a tangible and touchable manner so we can feel and joyously rejoice Allah’s amazing blessings and gifts from the sea and our other waters.

We had a wonderful afternoon at his office with Dr. Ruwa of Kenya Marine and Fisheries Research Institute (KMFRI), Mombasa, and some of his family members lead by his son Mr. Naim. We had great reflections on where Professors had brought us from, his wise counsel, his prayers and feelings of goodness for his former students. He talked about his great believe in Kenya and Kenyans as a people, He was such a man and great teacher to me as would never have experienced. That was a wonderful afternoon spent together. My son, Victor Mugambi, who had accompanied me to witness for himself who this great teacher I kept talking about has never forgotten the experience. He says that professor blessed him that he would be victorious in every thing that he will do. Amazing words!

In the New Year greetings He sent the following message to me  and I quote as follows:

“We want to thank you for your recent visit and the warm recollections that you brought with you. The Xmas card that you give me was the most wonderful gift that I have ever received from 40 years of teaching. Please, come again soon. Prof. Hyder”.

And I replied to him same day stating as follows:

“Thank you, Prof. Hyder, I pray that 2020 will bring Happiness, Peace and Prosperity and many blessings to you. I have never forgotten you as a Great Teacher”.

Rest in peace Professor, and we will carry on with the work on earth.