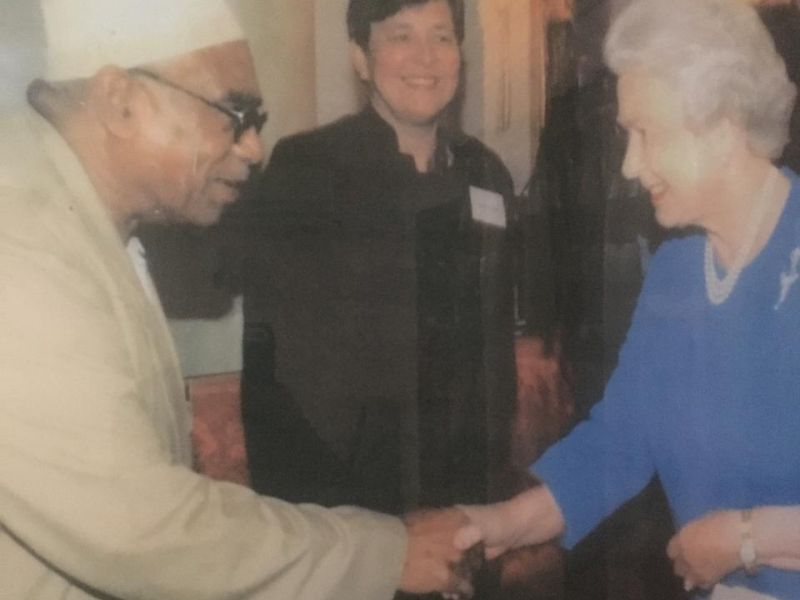 On Thursday 23rd April 2020, we lost a dear friend, a parent, mentor, a brilliant scholar, a visionary, Professor Mohamed Hyder Matano (1932-2020) who had been ill for some time. The unfortunate covid-19 lock-down robbed us off the obligation of standing behind his janaza in the mosque making du’a for him, carrying him on our shoulders as we escort him to his final resting place- our eventual resting place as well, for every soul shall indeed taste death – to pay our final respects, sorrow our collective companion as our own, one with whom we had laughed with, conversed, shared a meal with, is returned to the dust from which we originated, the dust we will all become.

I am not an authority on Prof’s life, may Allah have mercy on his soul, forgive his sins and grant him the highest abode in Jannah. I have interacted with numerous people who knew him better and are in a far better position to present his biography, and i will do my best to gather snippets of his illustrious life from them, especially his family, close friends and former students.

But still, i got to know him and his wise counsel has been instrumental in the shape the annual Swahili Literary Festival has taken.

I met Prof courtesy of Mwalimu Abdilatif in late 2018 when we were putting together the first installment of the Swahili Lit Fest. At the time, we wanted to build an interactive baraza of sorts where young and old, classic and contemporary, scholars and the youth can meet, share a cup of coffee and exchange notes on Swahili cultural heritage. We felt that a literary festival would do just that, and while curating the first installment, we wanted to introduce the classic to the contemporary by celebrating the life and contribution of prominent intellectuals in the Swahili Coast, and the individuals honored last year were Muyakka Bin Haji Al-Ghassainy, Shaaban Robert, Shihabuddin Chiraghdin, Prof Ali Mazrui, Prof Ahmad Nabhany and renown poet Ahmed Nassir Juma Bhalo who passed away weeks before we honored him at the 2019 festival.

Prof, i came to learn, was a man who loved visitors. I gave him a call when Mwalimu Abdilatif sent me his number (with instructions not to call him at specific times when he took his rest) and when i finally met him at his office in Kizingo, he immediately struck me as a very calm, attentive and observant man. He was also keen on my roots and the makings of the festival, noting that it was fascinating how the very idea of thriving in a Swahili space and interacting with the culture produces honorary Waswahili who are assimilated into the culture, either by adoption or adaption, my case being both since i had been adopted into Swahili culture through my conversion to Islam years ago, and by the fact that i had settled and married here.

Prof supported our idea to have an annual Swahili Literary Festival which would celebrate Swahili heroes, and to my delight, he agreed to attend the 2019 edition to talk about the life and influence of is contemporary Prof Ali Mazrui. Later after we had done a post-mortem of the festival with my esteemed elders Mwalimu Abdilatif and Prof Mohideen, I consulted with Prof Hyder on an idea we had narrowed down on- to have a permanent place where we would have a Swahili Commemorative Hall with biographies, works etc. of celebrated individuals and a corresponding digital space on this website.

Prof welcomed the idea, and while the three of us (Abdilatif, Mohideen and I) had floated the idea (Dr Athman Hussein of NMK had also suggested this) of approaching Pwani University, Kilifi to offer us a building in their vast campus to have our Commemorative Wall, Prof felt it was better to have it closer in Mombasa at Technical University of Mombasa (TUM), one because of the institution’s long history since its beginnings as MIOME (Mombasa Institute Of Muslim Education) and two because of its central location. Abdilatif, Mohideen and Athman welcomed this idea, and Prof asked that i go and see the VC Madam Laila Abubakr about it, saying, “Go to Laila. She is our daughter. Tell her you’ve been referred by her uncles (Prof and Mohideen).”

A little later after this while i was making follow-up on an idea to have a one-day event titled ‘Je, Waswahili Ni Nani?’, Prof Mohideen advised i talk to Prof about this. I met him again at his office and he gave me a list of scholars and historians i should reach out to, people he felt would address this topic and accord it due diligence. Every one i called and mentioned that Prof had reffered me to them agreed to do what they can when the event took shape. His words, when i asked him to be among the speakers and do a presentation of his paper ‘And Who Are The Swahili?’ was “Insha-Allah, Mungu akinipa uhai na uzima, nitazungumza.”

We however cancelled the event which was to be held in late September 2019 due to two reasons; one, Prof Mohideen had to travel abruptly to Canada and for the respect i have for him i felt it wouldn’t be appropriate to do the event in his absence, and two, The Waswahili Trust Fund was already planning to do a celebratory event in October for Prof Hyder. The event was a huge success, bringing together family, close friends and Prof’s students and mentees talking on the many ways that Prof had impacted their lives. Mwalimu Abdilatif sent a video recording form Germany, reciting a poem in honor of Prof.

I met Prof twice this year, first in mid-January to brief him on the events planned for the Swahili Lit Fest 2020 edition under the theme ‘Identity Politics On The Swahili Coast’, and in late February to ask if he would be kind enough to give a small talk about his teacher, the late Maalim Ali Abubakr. The very mention of Maalim Ali and our idea to honor him pleased Prof as much as it had pleased Sheikh Abdillahi Nassir whom i visited prior to this meeting, and what was supposed to be a twenty-minute meeting ran into an hour as nostalgia took center-stage with Prof narrating his experience with his teacher.

As Prof talked, some of his staff kept walking in and out of his office, setting plates on the table, and he explained that he was expecting guests for lunch. In the middle of his narration, he asked whether i had seen his son Naim. He was worried that the guests would come while Naim was away. One of the staff told Prof that Naim had gone to the supermarket and would be back shortly. He was however not satisfied with that, and asked if i could call Naim on my phone, and for a brief sixty seconds, i relayed information between father and son through the call. This is a memory i would love to hold on to because in the brevity of that call i had become a trusted messenger and bearer of information between father and son, two people i had come to like and appreciate.

Dhuhr prayers found me in Prof’s office. Naim, his brother and nephew had joined us and we prayed together- the young man as the imam, Naim to my left, his brother to my right and Prof behind us in his chair. I had to leave for work and declined Prof’s invitation to lunch. He however i insisted i carry a banana which i ate on the lift down. During the meeting, and in all my meetings with othe scholars, I had been jotting down notes as Prof talked, most espceillay about a paper he had done years ago titled The Ecology of the (wa)Swahili Across Space And Time, and like the teacher he was, he paused very now and then to allow me to make my quick notes from which I also posed questions. I remember at the end of the meting just before we prayed, and hios grandson was preparing the prayer mat, he said, “Bwana Abdulrahman, ahsante sana kwa kunielimisha!” to which we all laughed as I told him our metings always felt like a class on Swahili culture. But such was his nature, warm, attentive and always ready to create a light moment with his guests which in turn made him so adorable to everyone who met him.

Again, Prof said the same thing when i asked him whether he would talk about Maalim Ali at the festival. “Insha-Allah, Mungu akinipa uhai na uzima, nitakuwa pamoja nanyi, na nitazungumza.” I also asked if I could come back and do an interview with him for a series on our website and he said whenever I was ready I should just laert him and proceed. Prof was to call and text me on the morning of Friday 6th March when the Swahili Lit Fest was starting, saying he wouldn’t make to be with us since he had been taken abruptly ill, but he would ask Naim to send us his paper which we could have someone read at the festival.

I never made it to see him at the hospital because i had to leave for Kampala hours after the Festival was over, and by the time i got back a week later, the President had already decreed a lock-down due to COVID-19, and for Prof’s safety, it was wise not to have a lot of visitors at the hospital and later at home.

I received the news, just like everyone else, with a mix of shock and acceptance. At the end of it all, one must be fully resigned to the fact that From Allah we came, and to Him we will return; that is the eventuality of life. Prof was treated by the many people whose lives he touched with respect. love and a lot of adoration, virtues he gave to those around him as much as he received.

He will be dearly missed and always celebrated, and at Hekaya we will ensure that we remain true to our commitment to have The Swahili Commemorative Wall which Prof had given his blessings, that centuries from now, the Mswahili of the future will know of the illustrious Mswahili called Prof Muhammad Hyder who touched and impacted numerous lives, living on his dear friend’s- the late Maalim Shihabuddin- mantra Ishi Sana Ufe Sana!