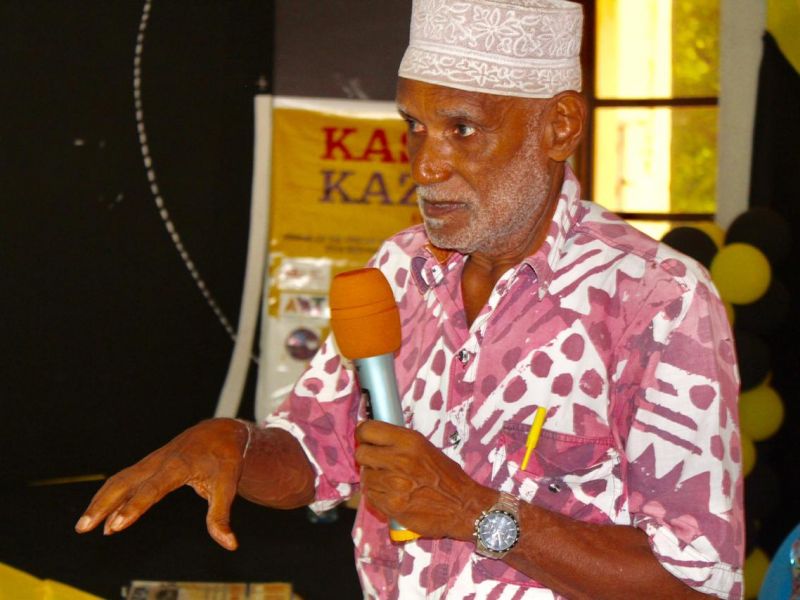 Written by Hekaya Initiative on April 26, 2020. Posted in Nonfiction.

The form which the Swahili Literary Festival has assumed is such that we cannot talk of Swahili Identities without talking about the people in our community who have, in one way or another, propagated our culture and language. Unlike the previous installment where we celebrated the life and works of six prominent individuals, this year, as advised by our esteemed elders Mwalimu Abdilatif, Prof Mohideen, Prof Khalil and the recently departed Prof Hyder, we only celebrated one individual, the late Maalim Ali Abubakr (1919-1984). Maalim was the first person to attend Makerere University from the Swahili coast and most of his students have long lamented that his contribution and influence had been forgotten over time.

One of his more prominent students, former legislator Sheikh Abdillahi Nassir has for a long stated that it is important to remember Maalim and his contribution. When I paid a visit to Sheikh Abdillahi at his home in February this year, just a month before the Festival to relay the news that we would be celebrating Maalim’s life, Sheikh was overjoyed. It was Maalim’s influence that molded a spirit of activism in the young Abdillahi Nassir who later joined mainstream politics as a legislator. Sheikh Abdillahi Nassir is a brother to Mwalimu Abdilatif, the first political prisoner in post-colonial Kenya and the late poet Ahmed Nassir Juma Bhalo.

Recounting his days as Maalim Ali’s student, Sheikh Abdillahi pointed that while Maalim attended the prestigious Makerere University, he did not mingle with the elite of his stature once he came back to Mombasa. Instead, he formed a social club where he spent more time with the youth, molding them into a generation of knowledgeable individuals who later became icons in their own right.

Another student of Maalim was the recently departed Prof Mohamed Hyder. Prof Hyder was instrumental in shaping my thought and approach of the Swahili Literary Festival alongside Mwalimu Abdilatif, Prof Mohideen and Prof Khalil. Every time i brought up an idea for the festival with Abdilatif and Mohideen, they would always ask whether I had consulted Prof Hyder about it, then they would offer their counsel based on Prof’s opinion.

While recalling his days as one of Maalim’s students, Prof Hyder explained how Maalim used to dispense knowledge to the young, energetic Swahili boys under his mentorship. One evening, Prof recounted, while they were heading home from soccer practice at Arab Boys, Maalim stopped them on the road, and posed a difficult question- such was his nature, to ask challenging questions that required his students to think critically- which the students were unable to answer. After all the students had weighed in their opinions, Maalim would give them an answer, then they’d continue walking. Prof narrated how a walk that would have taken them utmost twenty or twenty-five minutes would end up taking more than an hour, and at the end of it, a powerful bond was formed between teacher and students.

Unfortunately, not many of Maalim’s contemporaries are still alive. Most of his students are still around and even though we weren’t able to get all of them, the idea was to redo this session under the title “Intellectuals in The Swahili Coast” (which never happened due to COVID-19 lock-down) where we would bring in more students to talk about Maalim’s life in a way that the audience leave the session with a complete understanding on who Maalim was and why he is among the top influential educators and mentors in the Swahili coast.

Prof Hyder was also in line to speak about Maalim, and unfortunately he was taken ill the same day the festival started, and as humble as he was, prof sent me a text message saying he would not make it, but would organize to send an academic paper which would be read on his behalf. Sheikh Abdillahi Nassir was also taken ill around the same time, and due to this unavoidable circumstance, we weren’t able to capture Maalim’s life as we should have.

During my visit to Sheikh Abdillahi Nassir, and after expressing his joy that we had remembered Maalim, he said, “Natamani ningekuwa yule Abdillahi Nassir wa zamani; ningezungumza kumhusu Maalim ifaavyo, lakini taabu ndio hii, maguu yangu yana shida na pia fahamu zangu zaja zikipotea. Naomba msiniweke kama mzungumzaji, ila nitaweza kutoa mchango wangu wengine wakizungumza. Huenda kwa kuwasikiliza, fahamu zikanijia na nikatoa mchango wangu.” [I wish I was the Abdillahi Nassir of yester days; I’d have spoken about Maalim in the most befitting way, but as you see, my legs aren’t what they used to be, and my memory not as sharp. I do not want to be the guest speaker but I can give my contribution when others talk about Maalim. By listening to others talk, my memory of Maalim may come back to me, then i can comment]

The idea is to have Maalim’s biography alongside other intellectuals in The Swahili Commemorative Hall which we hope will materialize with talks we are having with a local institution based on Prof Hyder’s advice and influence. This Commemorative Hall is also a way of driving cultural and intellectual tourism, first in Mombasa and then the larger Swahili coast.

Celebrating Maalim was a good thing, and his influence can be seen by the way he molded his students to excel in the different disciplines they pursued and how they in turn influenced others.

For this session, we are immensely grateful to Prof Mohideen, Prof Khalil, Prof Hyder, Mwalimu Abdilatif and the family of the Late Maalim Ali, represented by his sons Abubakr and Jamshed. Jamshed was also a student of Prof Mohideen, and Prof is really proud that he got to teach the son of a teacher who had left a great mark in his own quest for knowledge.