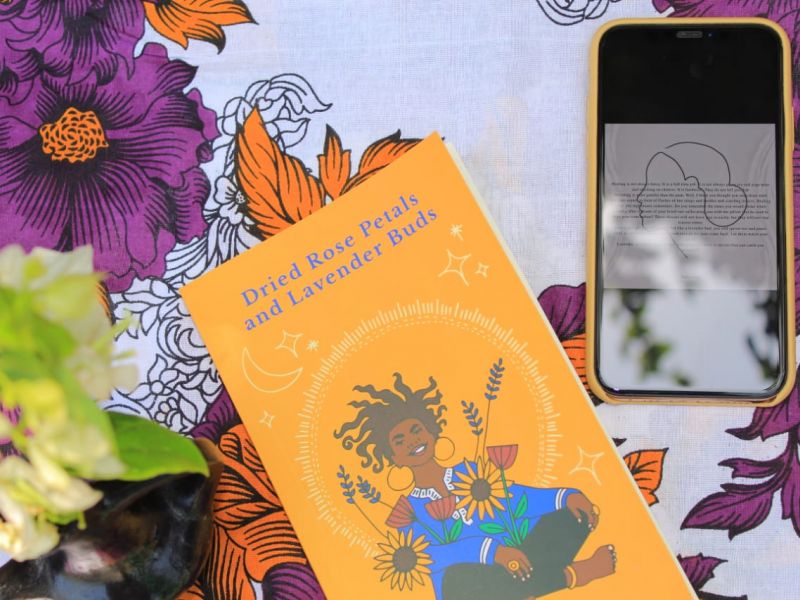 Written by Hekaya Initiative on March 2, 2020. Posted in Uncategorized.

The launch of Dried Rose Petals and Lavender Buds at Nyali Play House this past Sunday was not only an event filled with colour but love, laughter and a genuine sense of a community out to support one of its most enterprising daughters. Entering the Play House, one is accosted by two distinct things- a large number of women attendees (and very few men), and the generous splash of colour around the well-lit room with most ladies in matching saffron head scarves rhyming with the book cover. The colour and enticing space is most obviously to Salma’s (the author) liking; she is candid about her inclination to colourful things and the colourful Instagram posts prior to the book launch are a testament to this.

Colours aside, Salma’s poetry collection Dried Rose Petals and Lavender Buds is, in my opinion, an immensely important book in the coastal literary scene for a number of reasons. One, it is an affirmation that indeed, on the Swahili Coast, it is women who are at the forefront of telling our narrative properly. This affirmation follows a current universal trend where women writers have risen to prominence, coming in haste as a poetic complement to Zainab Alawi Bahroon’s Mabati-Cornell Kiswahili Prize winner Mungu Hakopeshwi from Zanzibar. These two books whose covers interestingly almost have the same colour schme on their cover pages complement and converse with each other in a multitude of ways. What Zainab has done with prose, Salma has done with poetry. I am not certain whether the two amazing writers have met, but if they could, this would definitely be the literary conversation of the decade in the Swahili coast.

Two, it reflects Salma’s energy. For the period I have known the author, I can confidently say that this is a woman who walks the talk. She has embraced growth, and if one has been keen on her poetic journey since her last poetry collection, it is justified to estimate that the only way for her to go is up, right from form, content and her paper choice in publishing.

Understanding the centrality of poetry in the Swahili coast and the role women poets played in passing on their prowess to other generations is crucial to understanding Salma’s growth. Change and growth don’t happen from a vacuum and studying the ecology that defines this growth makes one appreciate Salma’s work even more, especially when you realise the impact and influence that Kwame Dawes, one of her mentors, has had on her work. Travel is an important addition to the growth and as you read the book, you can almost feel the places she has visited, places that heavily influenced the book. For some reason, encountering falafel teleported me to a cobbled street in Cairo!

This growth was a long time coming, noting- as is- that Salma’s prowess in verse is an inherited trait whose time has come. There would have been no other better time to write this book. This was inevitable!

Three, Dried Rose Petals and Lavender Buds comes barely a year after the launch of New daughters of Africa, and much as the latter did not reach out to mentor the former, it is a clear demonstration of the universality of literature, how good intentions and enterprise can at times fuse, and how one book can shape another from an entirely different space even when both books or writers never at any one point interacted. Just as New daughters of Africa is a significant literary gem, ushering in a phase for women writers from Africa, Dried Rose Petals and Lavender Buds is a major win, not only for Salma, but for other women writers on the Swahili coast.

The book is available in Mombasa through Sumayya on 0790936802, HAI Book Hub and Prestige Bookshop in Nairobi.