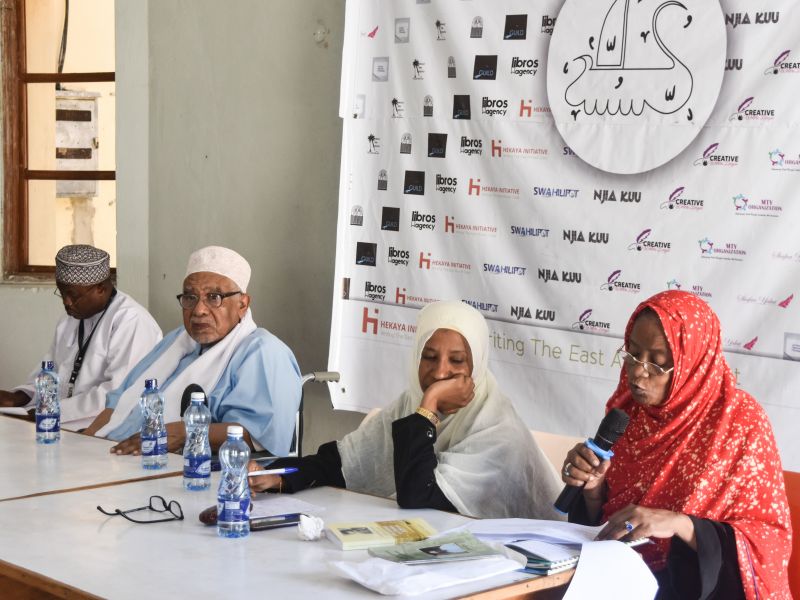 Personally, what really moved me to celebrate our heroes was the sadness I felt at the passing on of two prominent professors, Ahmed Nabhany Sheikh and Ali Mazrui, icons I wish I had met while they were still alive. While reading Professor Kai Kresse’s text “Phiosophizing in Mombasa: Knowledge, Islam and Intellectual Practice on the Swahili Coast”, I was engulfed with a nostalgic kind of sadness, wishing we had done more to celebrate their lives while they were still with us.

The idea to have the festival started off as a conversation between Lubnah (AWT Publishing Fellow and founder of Creative Writers League) and I about having a writing competition that would involve both primary and secondary schools in the Kenyan coast. This was largely driven by the need to mentor a generation of writers and having more contemporary works competing in the continental and global literary scene. We especially wanted to drive reading and writing initiatives in schools through the introduction of reading clubs where they were absent and reviving those which were dormant. The plan was to have the writing competition which would involve both English prose and poetry and Kiswahili mashairi and hadithi fupi, culminate into an awarding ceremony where we’d invite keynote speakers from the coast as a way of mentoring young artists.

The culmination, we felt, ought to be in the form of a festival that would bring together different aspects of the art and literary scene in the Kenyan and Swahili coast in general. The very first thought of a festival-kind of culmination was so exciting and well-articulated in our minds that we felt we had the power to do it before the close of 2018, finances notwithstanding.

Planning a festival is a tedious job, especially when none of its kind has been done previously and potential donors- even the ones familiar with your workk- are wary of a first attempt, but the most important lesson we learnt from this tedious process is that indeed when the time to implement an idea has come, nothing should stand in your way. One must remain true to their intention.

It is, however, worthwhile to point out that one should not hold a festival or any other function for that matter for the mere reason of doing it, rather, it is prudent to set expected outcomes which then become a way of tracking and gauging the festival’s impact. These intentions may not always be clear from the beginning, but the topics you choose and the speakers who drive the conversation are vital to creating impactful discourses.

Gladly, the first festival brought important literary and cultural producers in conversation, and in one of the post-festival talks we had with two of our elders (Prof Mohideen Ahmed and Prof Abdilatf Abdalla) who have become vital mentors offering wise counsel, the issue of Swahili Identity came up as a result of the festival, and this will in a huge way inform the 2020 edition.

Identity is at the core of every society, more so a vibrant, enduring one like the Swahili who had for long, especially in colonial Kenya, been perceived as people who did not belong anywhere. They were neither Arabs, or Africans, as the rhetoric went, and even to access the community schools, a Swahili had to undergo vetting to determine their identity. It is vital for a people perceived in this manner to assert their true identity as Africans with their own set of traditions and language. Thus, we feel it is really important to discuss this in the 2020 edition under the theme “(Wa)Swahili and Identity Politics”.