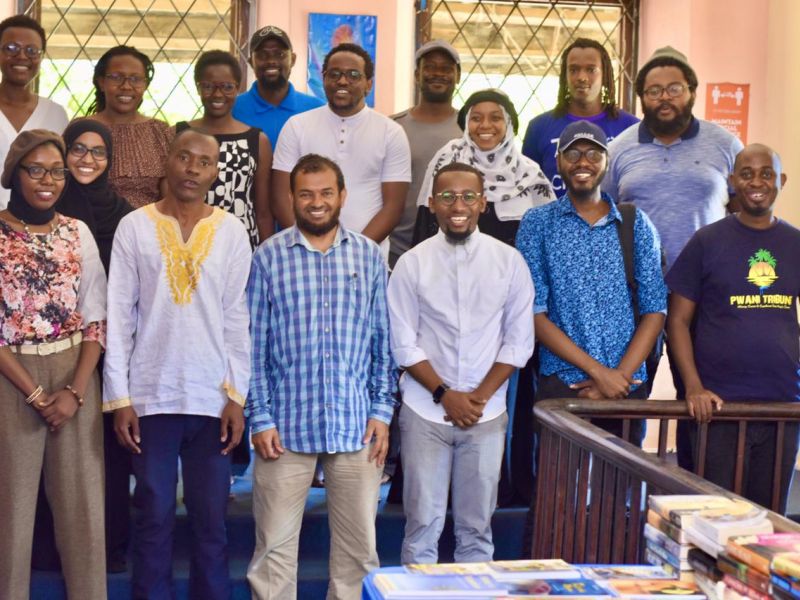 Written by Hekaya Initiative on May 8, 2022. Posted in SLF, Uncategorized.

The 4th edition of the festival which happened this March was informed by a series of interconnected conversations, some exploring the issue of identity and others centered on archiving coastal culture. Both identity and archiving are overlapping themes and a whole lot is at risk of loss if we do not put in place the proper structures to ensure proper documentation.

Initially the idea was to have “Transmuted Spaces & Kiswahili Dialects” as a theme, and this was in response to the misrepresentation of some coastal spaces and how literatures, cultures and knowledges beyond the Swahili people have been neglected. The Swahili coast is a diverse cultural space with other vibrant cultures and languages that ought to have fair representation, and this is in consideration of Mijikenda, Pokomo, Taita and other cultural spaces in the Kenyan coast, for instance.

The shift from this theme to archiving was heavily informed by a set of informal conversations held between November and early March involving archivists and literary activists in the Kenyan coast. In Kilifi County, a brunch brought together writers, film-makers, linguists and scholars and the common denominator in this meeting was the express need to archive our culture, and how we were all doing the same things but using different means to achieve the objectives. Later in March this year, a similar meeting took place in Mombasa and it took on the same tempo as the Kilifi meeting, escalating the need to have these conversations and build something solid.

Bottomline, there was a need to consolidate our efforts and have a united front to champion for this cause.

And, the idea to have an archive which can take either digital or physical form is imperative, an attempt that will bring together archivists from diverse spaces in the Swahili coast. It would only be fair to have equal representation of all coastal cultures in this archive, generating more interest in indigenous knowledges which would first, perhaps render a well-rounded answer to the general question(s) Mpwani Ni Nani? Pwani Ni Nini?, and trickle down to the more specific ones-

This would also compel us to rethink important cultural ideals like the kaya and the shifts that may be instigated by climate change.

The festival, another hybrid edition had several sessions spread over three days:

The CV platform is a great opportunity at building a Kiswahili corpus that can be used for a multitude of applications from finance, education, agriculture and so many more that make tech accessible to non-tech communities whose main language is Kiswahili.

Session two: Translating the coast- in a session facilitated by Nathalie Koenings and Aurelie Journo, we had coastal writers Fatma Shaffie and Hassan Kassim in conversation about their individual and collective work, both having worked together in a project yet to be published by Two Lines Press, Hassan translating Fatma’s short story from Kiswahili to English.

The session was important in showcasing how contemporary writers in the coast are reading, critiquing and translating each other’s works, bringing to our attention other major translation works by coastal writers like Mwalimu Abdilatif Abdalla with his translation of Ayii Kwei Armah’s The Beautyful Ones Are Not Yet Born to Kiswahili.

Session three: Building an archival culture- this was the festival theme, informed by a brunch in Kilifi and other conversations in Mombasa. Facilitated by Dr Jackie Kosgei in conjunction with Albert Mwamburi of Pwani Tribune, the virtual session was an extension of Jackie’s research on the literatures and oratures of the coast, an activity that brought different archivists from various areas in the Kenyan coast in conversation. Out of this, future collaborations were forged which, combined with the Kilifi brunch, will work towards building a collective archival space.

Session four: Writing The Coast- the session, as planned, was to be facilitated by Dr Jackie Kosgei in conversation with Prof Rayya Timamy and Prof Rocha Chimerah on writing the coast coupled with readings from Hassan Adam’s Alfu Lela U Lela, translated from the German language with a look at Brenn’s 1928 translation of the same into Kiswahili and how both writers treated the text.

This was not be as both professors got engaged in different commitments in their respective learning institutions and the session instead became an interactive platform where readers, writers, activists and scholars present engaged on documenting the coast, case study being the Malindi Maulid Festival which is in its 103rd year now. Sumayyah Hassan, whose family has been the custodian of the Malindi Maulid Festival was present as well

Session 6: literary activism in the coats and readings from Safal-Cornell Kiswahili prize winners- and what a way to wind-up the festival with Dr Doseline Kiguru facilitating an interactive session on role of literary activism in the Kenyan coast, and later with readings from Dr Ahmed and Halfany Sudi, enjoying Dr Ahmed’s shairi form written in Ki-Mvita and Halfany’s terrific prose. The session combined the readings in such a way that it brought into focus the evolution of the shairi form and how important it is, in spite of inevitable changes that occur, to keep the original shairi forms alive.

All in all, the quality of the conversations in this 4th edition has motivated to escalate our efforts at archiving story telling in the coast and bringing together different storytelling genres to achieve this objective.